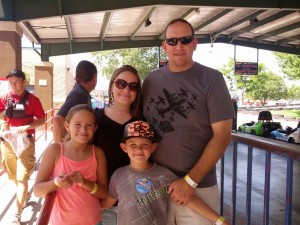 This month’s employee spotlight is Aaron Neal. Aaron is responsible for KidCheck’s software development team and holds the auspicious title of “King of the Nerds.” Aaron can often be found packing a pistol on to the gun range to participate in the competition sport of Practical Shooting. Aaron is an avid outdoorsman who enjoys spending time with his family, eating random ethic food, and building things.

What do you enjoy most about your developer role & working at KC?

It’s exciting to know that you are working on something that is very important and meaningful. Not just some game for phones or a website to sell t-shirts. KidCheck helps keep kids safe and that is very cool thing to be working on! As far as working at KidCheck in general, it’s just an awesome group of people. Everyone is so nice and motivated to help people out.

When you were younger what did you want to be when you grew up?

I wanted to work at the grocery store because all the people there seemed really nice and it appeared to be a fun job. And everyone else I knew picked fireman or policeman so I wanted to be original.

If you could be a super hero, who would it be?

Definitely Batman. He has all the cool toys!!

In college I was a mobile DJ. One weekend I was playing at this party in an upstairs ballroom of this old building. After we got the DJ area setup the party organizers stopped by to do a final check. I played some music and they started dancing and jumping around. I could feel the table on the stage moving, then both of my CD players started skipping. The party organizers were freaking out, but I told them I’d get it figured out by party time. I ended up running some thick wire from some screws in the ceiling down to the stage, and suspended each CD player with wire. During the party the stage was bouncing up and down, but the CD players never skipped.

Finish this sentence…Something you may not know about me is?

I’m really fascinated by how ancient people used human power to move things. I think it’s something we forget in modern times. We rely too much on machinery when all you need is a good plan and some muscle. So when I had 8 landscaping boulders delivered to my house a few years ago, I used nothing but poles, straps, and a hand truck to move and place them. Each one weighed between 1500 and 4000 pounds! Some people don’t believe this story…but it’s true.