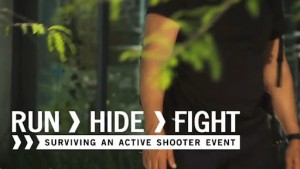 This is a re-post from November of last year and unfortunately its significance hasn’t diminished. It’s still one of the best training videos we’ve found that offers good advice for surviving an active shooter scenario.

Last week KidCheck participated in the INCM Equip Starter Course and one of the attendees in the Facebook community asked about training information on this topic. It got us thinking that if it was on the mind of one children’s ministry director, it might be on the minds of others, so we’re sharing it once again.

The video was filmed and produced in an academic setting in Canada, but the principles it conveys are relevant for any organization interested in preparing for such an event.

It’s been estimated that in the United States “379 people have been killed and 1094 injured in mass shootings in 2015 alone.” 1

“In many cases, there is no pattern or method to the selection of victims by an active shooter, and these situations are by their very nature unpredictable and evolve quickly.” 2 This creates a complex scenario for churches due to their unique environments where children and elderly are in attendance. So why share such horrific information about what some would describe as an American epidemic? Two words – Preparedness & Prevention!

A lot of people think of churches as a safe haven from violence. However, this is not always the case. As with many active shooter incidents, most occur without warning, making it imperative that plans are put in place to ensure the safety of those attending, the staff, and the facilities.

In collaboration with community partners such as first responders, public and mental health officials, and local government, churches can take steps to map out a plan to address these emergencies.  This plan is often referred to as an EOP or Emergency Operations Plan. The steps to creating a good EOP for churches will be covered in another post.

For today, we’d like to share a scenario training video entitled, “Surviving an Active Shooter Incident.” It was produced in an academic setting and is provided by the Campus Alberta Risk and Assurance Committee. Although a campus setting is different than a house of worship, there are some good tips and tricks to consider when thinking about planning for such a scenario.

To learn more about improving child safety, additional security tips, and best practices visit the KidCheck Blog or connect with us on Twitter, Facebook, Google+, or Pinterest.